NORTH CREEK -- This year’s Wayne Stock festival, scheduled for Aug. 3 at Ski Bowl Park, will be more of a celebration than usual.

The event, which started as a fundraiser for Wayne Bukovinsky after he was injured in a motorcycle accident, has been named the top community celebration in the nation in Johnsonville Sausage’s first “The Best of Us” competition.

Making the news even better is the $10,000 award that will go to the North Country Hardship Fund, which was founded with proceeds from the first Wayne Stock, which took place in 2008 after Bukovinsky’s accident earlier that year.

“It’s quite an accomplishment what our small group has done,” Bukovinsky said Tuesday. “This is a great thing for us.”

Bukovinsky’s wife, Tammy, wanted to thank all those in the area who voted for Wayne Stock after Johnsonville chose the top 10 events after getting 156 nominations.

“We’re a little event in North Creek, New York. We had 1,000 people come through the gates, and some of the other events draw 70,000,” she said. “We are so excited with the support of all the people in the area who voted every single day for almost a month.”

The fund holds a series of events, including the annual concert. Earlier this year, it held a spring runoff party in North Creek, as well as “Band Jam for a Cause” in Glens Falls and a cabin fever party.

“We want to help with anything due to accidents and unforeseen events,” Bukovinsky said. “We will help with house fires, car accidents, anything like that. If you’ve got physical injuries or need help because of something like that, we are there. It’s all about supporting the people who need help.”

The concert was first organized by Bukovinsky’s uncle, Steve Studnicky, and his friend, Jim Martin.

Bukovinsky, who was a roadie and a concert lighting technician, has been able to draw some regionally known musicians to the concert.

This year’s event will be start at noon Aug. 3 at the Ski Bowl Park, and it’s theme is “Believe.”

This is the first year Johnsonville, a company based in Wisconsin, has done the “The Best of Us,” and its companion “Top Educator” program.

Bob Terrell, who retired after 42 years of teaching and coaching at East High School in Salt Lake City, was the top educator.

The competition called for those people nominating events to explain the community’s American values, what makes the event one of a kind and how it helps the morale of the community.

“Johnsonville was very interested in inviting the country to identify and celebrate what makes America great, so we focused on two categories: community celebrations and educators. Our culture at Johnsonville celebrates the values of teamwork, humility and giving back,” company spokeswoman Stephanie Dlugopolski said Tuesday. “We couldn’t think of a better way to celebrate these values than by recognizing the individuals and groups who bring these to life in their own communities to benefit others, and invite the country to see what others are doing and show their support by voting for the ‘best’ in our country.”

“The big problem is nobody knows about us,” she said. “The story needs to be told about the people we are helping.

“We are always telling people we need to help us help them.” she said.

Local Group Gets $10,000 to Help Neighbors in Need

North Creek — A local group that helps those who have suffered a tragedy in their lives has won a national contest.

The North Country Hardship Fund based in North Creek tells Look News they recently won the Johnsonville Sausage Best of Us awards.

The group was awarded $10,000 for its Wayne Stock music show and auction. The fund helps people in five area counties including Saratoga, Warren and Washington.

You can find out more at the organization on their website.

Johnsonville Announces Top 10 “Best of US”
Educators and Community Celebrations

Sheboygan Falls, Wis. (June 25, 2013) – Johnsonville Sausage today announced the results of America’s vote for the Top 10 Educator and Community Celebration winners of the “Best of US” contest – a nationwide call to identify the individuals and events that reflect the American spirit. Based on more than 71,000 votes from individuals across the country, Robert “Bob” Tyrell, a teacher from East High School in Salt Lake City, Utah earned the $10,000 grand prize in the Educator category. The Community Celebration grand prize of $10,000 went to the organizers of Wayne Stock, a music festival held in North Creek, N.Y. that raises funds for victims of tragedy.

The “Best of US” contest featured unique nomination criteria in both the Educator and Community Celebration categories. Johnsonville summoned the nation to spotlight educators who are not only effective in the classroom but also take action beyond the walls of their classrooms in order to create better places to live. In the Community Celebration category, the contest focused on events that most reflect the values of America.

Based on a public nomination and voting process, here are the nation’s top 10 “Best of US” educators and community celebrations:

In addition to the $10,000 grand prizes, the nine other finalists in each category received $1,000 each.

“We hope the rest of the nation is as inspired as Johnsonville is by these educators who recognize the power of giving back to local communities and community celebrations that bring people together in uniquely American ways,” said Ralph Stayer, CEO of Johnsonville Sausage. “These unsung heroes and special events truly capture the Best of US.”

The Top 10 in each category were identified following a public voting period that ran from May 23 to June 14. Robert Tyrell received the highest number of votes, earning him the grand prize from a pool of 119 original educator submissions.

"I'm so honored and humbled to be voted as Johnsonville's Best of US grand prize Educator. What a great capstone to my career!" said Bob Tyrrell, who retired at the end of last school year after 42 years as a high school teacher and coach at East High School in Salt Lake City. "Winning the top prize is such a wonderful and rewarding way to end my teaching career. If I had to do it all over again, I would still choose to be a teacher."

"We’re truly touched by the outpouring of support for Wayne Stock," said Wayne Bukovinsky, North Country Hardship Fund Inc., President and Wayne Stock event organizer. "Johnsonville’s generosity is helping put small towns with big purposes on the map. This awareness and prize money means so much to our community and will be put to good use helping victims of tragedy."

The nomination period for the Best of US contest began on March 26 and ended on May 13, during that time Johnsonville received 275 total nominations.

For additional information and details about all the Top 10 nominees, visit www.johnsonville.com/bestofus. No purchase was necessary to enter or win. 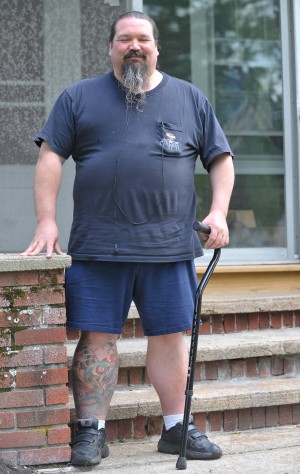 T.J. Hooker - thooker@poststar.com Wayne Bukovinsky of North River stands in front of Opportunities North in Queensbury on Friday, July 30, 2010. Bukovinsky, who is recovering from a traumatic brain injury that resulted from a 2008 motorcycle crash, is continuing a fundraising concert that was originally set up for him called 'Wayne Stock.' The proceeds from the event, which is scheduled for August 7th in North Creek, will benefit The North Country Hardship Fund. 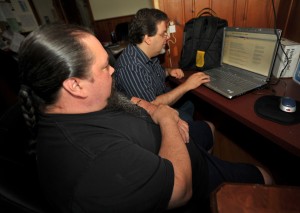 T.J. Hooker - thooker@poststar.com Wayne Bukovinsky of North River, left, and independent living skills trainer Tim Engwer work on the computer at Opportunities North in Queensbury on Friday, July 30, 2010. Bukovinsky, who is recovering from a traumatic brain injury that resulted from a 2008 motorcycle crash, is continuing a fundraising concert that was originally set up for him called 'Wayne Stock.' The proceeds from the event, which is scheduled for August 7th in North Creek, will benefit The North Country Hardship Fund.